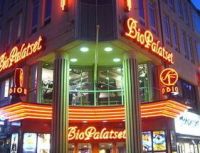 SampoMedia founders Michael Gubbins and Peter Buckingham were invited to deliver a lecture at the Gothenburg International Film Festival with the provocative title How To Double Revenues…By Understanding Audiences.

In a three-part series starting here, we will look at the key themes raised in the lecture. The talk itself, and SampoMedia, have a depth of knowledge and data to back up their assertions – and clear ideas of how the missing links in terms of value and evidence can, and ought to be acquired.

These articles, however, take a snapshot of what we see as key themes.

1. HOW TO DOUBLE REVENUES…

The SampoMedia lecture started with an underlying assumption that is more contentious than it seems.

It suggests that it is desirable, and indeed possible, to create direct links between producer and audience on which revenues can be built. In film, the truth, certainly for the vast majority of independent producers, is that they are in the business of debt finance and recoupment, not of direct consumer revenues.

The aim is to sell the rights to their work for distribution and later exploitation on particular platforms at particular times. There is mostly limited incentive to work directly with a final audience.

What’s more there is not a transparent and efficient flow of information that allows producers to draw conclusions about the performance of their film to inform future work. Even less has there been much scope for creating relationships with consumers, which can be transformed into revenues.

And so we have a business where content is not aligned with demand. Most successful businesses in most fields are based on evaluation, improvement and innovation to ensure that consumers continue to buy products, and investors and shareholders have confidence in a sustainable business.

Films in the independent sector are left to survive film by film and the evidence is that most don’t.

CONCLUSION: Any serious desire to build revenues for producers must be built on creating direct relationships with consumers, transparent audience data and an influence over the distribution process.

Michael Hay, a creative director at Swedish furniture giant has developed a compelling way to look at the development of an industry. He suggests that there are four factors that all need to be present if change is to be successfully achieved:

The shared vision and our ability to realistically deliver on it will be the subject of much of the work of SampoMedia and they are an increasingly essential part of public policy as well as business practice.

But it is worth exploring that first question because it is both critical and largely unspoken. For all the hype around digital change, one should always at least consider the cliche – ‘if it ain’t broken, don’t fix it.’

One might argue that the current system works in its own idiosyncratic way. There are plenty of success stories at the box office and public money in many parts of Europe are helping fill gaps left by dwindling revenue streams and experimenting with new forms of distribution and audience development.

Film has filtering systems intended to ensure that talent is discovered and quality maintained. The digital radical contempt for ‘gatekeepers’ keeping people away from real choice must be balanced with the equally important role of ‘curators,’ which can help make choices in a world of seemingly limitless choice.

Those curators include commissioners, film fund heads, sales agents, distributors, exhibitors and even the much derided critic, in the arthouse world, if not the Hollywood blockbusters.

The argument here, however, is that there are reasons, both positive and negative that are building into an unstoppable pressure for change.

CONCLUSIONS: Curation has become a more sophisticated business in a digital age, at best helping consumers make informed choices, rather than artificially limiting choice. And it must be seen in the context of more individual and community-based means of making choices, such as social media and personalisation. That in itself does not alter the emerging realities discussed below and it is worth remembering the IKEA conclusion that you might have a shared vision, industry capacity and realistic models, but without pressure for change, you are heading for ‘slow death.’

The lesson of digital change in industry so far is that the strongest motivation for change comes from having no choice, not from a desire to embrace the new.

The lecture included figures to show how analogue models were in decline. In the case of film, the biggest danger has been the drop in DVD sales, which is threatening to accelerate as the ownership model is challenged by streaming and the Cloud, and as high-street retailers close.

We are already close to the point where box office ticket sales (boosted by increasing prices) will be equal to DVD sales when once the ratio was 1:3. Sampo figures showed that online revenues remained a fraction of physical sales and suggested that the growth area was ‘all you could eat’ subscription services rather than download to own or one-off DVD, raising questions about the revenue flow.

One key factor is the sheer volume of films flooding the market, that will need to compete for consumer time with a vast array of other entertainment options.

The number of European productions has jumped 76% over the last decade, from 732 in 2002 to 1,285 in 2011. Those numbers have not been matched by any increase in screens in cinemas or DVD sales.

There have been short-term advantages in a dramatic drop in US films after a short-lived equity bubble at the start of the century. Back in 2005, the number of films produced in Europe and the US was roughly equal (920-911) but by 2011 Europe was producing 50% more films (1168-677). The improved European market share did not come close to that gap, which in any case is now becoming less of an advantage.

Hollywood is now concentrating its efforts on major franchise blockbusters, which will make an even bigger global impact through digital cinemas. In 2005, 14 film with production budgets above $100m were released but in 2011, that had risen to 24.

Independents are having to compete not just with each other but with the ever more powerful franchise giants, the vast back catalogues from their own states and around the world, and with the many other distractions offered to consumers.

CONCLUSIONS: Previous exaggeratedly apocalyptic warnings about ‘broken’ business and the ‘sky falling’ on independent film should not lead to complacency. The figures suggest that there ought to be pressure for change given the increasingly clear evidence.

The digital revolution has in many ways already happened. The vast majority of the ways we now consume film are digital, including now cinema itself; distribution, marketing and communication about films is digital; even the way that we interact with each other as film audiences is digital.

There are plenty of examples of success stories that have been driven by smart use of online tools and social media. There has been a tendency, however, as we shall discuss in the next report, to miss the point about digital – it is now so prevalent that its influence is intrinsically tied up with the oldest art forms.

Opera has been reinvigorated through digital cinema distribution; pop music can reach vast audiences, as the billion YouTube hits for Psy’s Gangnam Style showed; apps are offering new forms of education and opening up new markets for the arts; and it is helping create the momentum behind blockbuster art exhibitions, and not just the classical greats but  contemporary artists, such as Joana Vasconcelos, who drew 1.6 million visitors to her installation at the Palace of Versailles in 2012.

Social media can create unprecedented momentum behind ideas, as the Arab Spring and Obama’s reelection showed.

What film-makers are rapidly coming to understand is that such momentum is not easily created from a standing start, as we shall see later. That is particularly so given that there is not necessarily any immediate economic benefit – Facebook Likes do not easily turn into revenues.

Nonetheless, there are tools which allow producers to exploit value in their work that might currently be thrown away, which is the critical theme of the final part of these reports.

What is often missed, however, is that we are in the foothills of digital expansion, and the most important developments may be yet to come: the lecture offered figures from analysts showing dramatic future expansion in areas such as:

This new world may open up opportunities for whole new forms of content that may open up new opportunities for producers. That may be in the form of new funding for film or high-quality series. As the VOD market consolidates, the fight for dominance among the service providers may be based on finding quality original content on the HBO model, rather than just access to vast amounts of content.

Apps, advertising, music, etc open up potential new fields that may offer ways of exploiting IP in a film project, or even open up new forms of transmedia content.

CONCLUSIONS: New digital developments are unquestionably exciting and may offer new options for film-makers but there are missing links. The biggest of these is the lack of transparent, credible data on the audience. What producers lack is evidence to drive decisions; while distributors and exhibitors are increasingly getting access to real-time, detailed data, it is not systematically fed back into production to help build sustainable new revenue models or to create informed experimentation.

A frequent complaint at conferences is that digital simply has not delivered on its promise, and there is a point to that statement.

Digital enthusiasts were quick to make grand statements about what the Internet would deliver, with judgements about what audiences would want in future that were every bit as fanciful as the conservatives who believed that nothing would change.

But the argument of the Sampo lecture was that digital was not some coherent movement with a mission and a sense of direction.

The Internet was not invented for the efficient distribution of film. It was a network which has grown in ways that hardly anyone envisaged; the media and creative industries have been playing a decade-long game of catch up.

Much of today’s landscape has been the result of the Law of Unintended Consequences; it was not a rejection of the old in favour of the new. Few people wanted their high streets shops to close but they enjoyed the efficiency and price that came from shopping online.

The assertion of this lecture was that the analogue worlds and Internet worlds are built on fundamentally different foundations.

The business models of the traditional film industry is based on windows, borders, an industrial value chain, intellectual property rights and a one-way closed model of access.

The Internet works on the basis of immediacy, global borderless reach, an interactive structure, free access and an open engagement with users.

What the industry is struggling with is the attempt to find a hybrid model, but there are clearly major compatibility issues, hence the arguments about release windows, territorial sales and IP.

That is happily not the core of this argument.

The discussion here is that if producers wish to find new revenues, the best starting point is not competing models but understanding demand.

CONCLUSIONS: The tension between analogue and digital models will lead inevitably to problems. Much of the industry debate is about how to hold back the tide and to implement policies and practices that will hold back the digital tide. This discussion, however, is suggests production can take advantage of developments by trying to bypass or to redefine the relationship with the sales and distribution parts of the value chain to create new forms of relationship with audiences.

In the next part, we look at some of the developments that suggest positive ways forward in creating revenues before focusing on ways of thinking about audience demand.