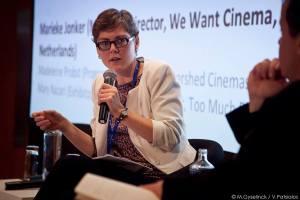 CINEMAS need to learn to work with young people, rather than for them, if they are serious about renewing their audiences.

That was the central theme of a series of sessions at this year’s Europa Cinemas conference in Athens, dedicated to the renewal of cinema audiences.

The discussions, chaired by SampoMedia’s Michael Gubbins, and including two presentations by co-founder Peter Buckingham, looked at how the social experience of cinema can survive and thrive in the on-demand era.

Buckingham helped set the agenda by sharing the findings from SampoMedia research (including the forthcoming BFI-sponsored work on multimedia premium VOD releases) and adding context from his long experience of the wider film industry and analysis of audience data.

His message was that access on many devices to vast stores of film and media content, and the greatly increased competition for leisure time, had created an age divide in media expectations. Older audiences remained loyal to cinema as the place to watch a film, but younger Digital Natives, were more agnostic, seeing it instead as a desirable place to see some kinds of film.

He also warned that price was a growing factor in the choice of where to see a film, warning that cinema was perceived as expensive – a feeling accentuated by the cheap option of all-you-can-eat Subscription VOD services, such as Netflix or LoveFilm.

He suggested that cinemas needed to look hard at how to build “trigger points”, by which young audiences could be encouraged, rather than pushed to find their way to specialised films. Those triggers would come from engaging young people with different kinds of content, accessed through a range of media and devices.

It was an idea that has been practically applied in many aspects of the work of forward-thinking cinemas. Mary Nazari, of Moscow exhibitor Pioner Cinema, for example, showed how screening television series, such as Breaking Bad, and live music events were part of a diverse offering that attracted younger audiences; and when they had been won over to the venue, there was then encouragement to explore the cinema programme.

Madeleine Probst, Cinema Programme Producer, at the Watershed in Bristol explained how interest from younger audience were being encouraged by an activities programme that included live events running alongside film screenings. This participatory approach had proved popular and opened up a dynamic new way of using the venue, such as The Shining-centred Corridor Sessions.

Marieke Jonkers, from the Netherlands (pictured) has established a strong reputation for participatory programmes with We Want Cinema, inviting audience involvement in programming decisions (Cinema On Demand). She told the conference about a new scheme to show teachers how to bring cinema to life as active engagement, rather than passive lessons.

Getting young audiences to come to an independent cinema remains a big challenge of course, not least, as Buckingham reminded delegates, because the desires and expectations of young audiences might differ wildly from what has been an older core customer. But the real challenge remains how to create an interest in seeing European and arthouse film from those who may have come to the venue for a different experience.

Domenico La Porta had an intriguing strategy to tackle the issue in his upcoming Movie Hunters app, which introduces a game-playing element to film discovery. Sylvain Pichon, of the Le Melies cinema in the French city of St Etienne, was also employing  cross-media tools and social networks to build younger audiences: Its Skype Me If You Can scheme connecting film-makers and audiences is a particularly good example; while Belgian chain Les Grignoux is also employing a number of cross-media and engaging educational tools.

Perception issues, however, still remain, and at least part of the problem is the branding of arthouse film in the minds of younger audiences. To an extent, the problem is not necessarily inherent in the content; delegates heard from South Korea’s Boram Kim, that Movie Collage, the arthouse arm of Korea’s exhibition giant CGV, was expanding fast, led by educated women between 25 and 34 in contrast to the European experience.

Redeveloping the image and brand of cinemas can go a long way to removing the “dusty” image of arthouse among a significant section of young audiences, according to Daniel Sibbers, head of marketing at German independent chain Yorck-Kino. Yorck has been working hard on a fresh corporate feel that works across all media and claims that it has helped attract new customers. The UK’s Picturehouse Cinemas have also been significant leaders in changing attitudes through a fresh feel and embracing new media opportunities.

But all these initiatives cost time and energy and there was concern on how far a small theatre could really follow the lead of the innovators. In the UK, that problem is partly being addressed with the creation of a Film Audience Network (FAN), a group of regional hubs uniting cinemas of all sizes throughout the UK. Jon Barranechea, who is coordinator of the South East hub suggested that there was potential for sharing ideas and data that might bring vital long-term benefits.

Working together in networks, including of course Europa Cinemas, might become a greater necessity as the need for new skills develop in the wake of fresh technology and new on-demand options. Social media strategist Marco Odasso showed how new patterns of use are emerging, and how more sophisticated ways of communicating are now needed to stand out from the crowd.

Active audiences with higher expectations and with many more alternative options in a time-poor world represent new challenges – and standing still and protectionism do not seem to hold much promise. What the Europa Cinemas panel suggested, however, is that there was now a determined and focused effort to understand, enhance and sell the cinematic experience.