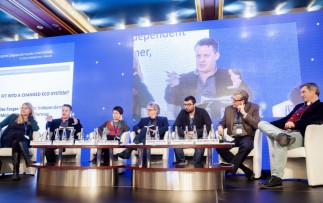 SampoMedia has been heavily engaged over the last few months in a series of events, workshops and conferences around the world. And it has been working on a series of in-depth reports, covering a wide range of audience-centred issues across the media and audiovisual sectors.

Over the coming weeks, we will be looking to share reflections on some of those issues.

The series begins tomorrow with part one of a two-part look back over the Europa Cinemas conference in Prague. SampoMedia founder Michael Gubbins (see picture) chaired the three-day event, which proved both progressive and dynamic.

It raised a lot of interesting questions about the role of the Experience Economy in an always-on, on-demand age; changing attitudes to audience development; extending and expanding the social experience; brand building and demand creation; and the relationship between the big screen and new platforms.

SampoMedia has been involved in a wide range of events and activities, committed in one form or another to innovation.

Gubbins, for example, has been writing the report on a fascinating Think Tank at this year’s Power to the Pixel Cross-Media Forum (which will be published soon as a free download soon at powertothepixel.com).

He has also served for the second time as a jury member on the Canada Media Fund Experimental Stream. Those deliberations were strictly confidential – as are some of the other reports in which SampoMedia is engaged – but the broad experiences, cutting across sectors and countries, will feed into a short series about the nature of audience-driven innovation.

Among the reports to be published soon, is the latest in a five-year series, supported by European film funders agency CineRegio. Called Building Bridges, it offers a perspective on the diversity issue in film and other media.

The report focuses on inequalities in gender, age and social class, from the perspective of both content creation and consumption. It argues that gross imbalances are indicative of deeper issues in terms of industrial processes, institutional attitudes and wider social forces.

While parity in jobs is clearly an essential issue that must be resolved, there are bigger questions to ask about the nature of culture and art in a changing cultural, social and technological environment.

This site will carry a number of articles based on the report, while the full report will be available in the coming weeks as a free download at CineRegio.com.

Magnifier: a fresh approach to production

One practical and progressive new development in production in the UK is the Magnifier model, developed and now being implemented by Ffilm Cymru Wales (of which Gubbins is chair).

The agency has taken a positive approach to the serious challenges of the emerging on-demand digital environment, introducing a scheme that puts audience engagement, collaborative working, data sharing, and new IP creation at the heart of its funding and development processes, beginning in the earliest stages of projects.

Our report will look back at the first Magnifier sessions and forward to the next iteration of the scheme in 2016.

Michael Gubbins was invited to make a keynote speech at this year’s Nordic Film Days in the German city of Lübeck. He offered some ideas on how industry could adapt to audience demand in ways that could create sustainable and diverse content. That report will be posted here this month.

SampoMedia is involved in a number of projects that will be completed at the end of this year and the beginning of the next. They include evaluation of the BFI Film Audience Network’s Conversations About Cinema project; a big analysis project involving more than 25 films for Telefilm in Canada; more Insight reports on new release models for the BFI; consultancy and editorial involvement in a major report about the circulation of European films for the European Commission; and organisation and presentations of a major event in Amsterdam in February (more information coming soon).

We hope the insights will be useful.

SampoMedia offers a number of services for clients.

They include in-depth research and reports; policy advice; conference organisation; and chairing and keynotes at conferences.

We often work in partnership with third-parties and are happy to talk about collaborations.

If you are interested in working with SampoMedia, email mike@sampomedia.com.